In my daily practice in Osteopathy in Montreal, I am sometimes asked how to help with the post-covid healing that some people seem to struggle with in order to regain their full health and respiratory capacity.  Not being a doctor, I can only refer them to official sources and one of them is the Institute of Functional Medicine.

A few months ago, the Institute of Functional Medicine in the United States issued a list of compounds from medicinal plants that have been studied and would be particularly effective in countering the replication of the Covid-19 Virus in humans.

This institute, for those who are not familiar with it, is the cutting edge of modern holistic medicine with a thorough and precise understanding of the systems of the human body in relation to its environment.  With approaches that combine accurate blood testing and screening and treatments that include diet, lifestyle, botanical supplements, manual therapy and certain medications when deemed necessary, functional medicine is becoming an increasingly common approach among experienced physicians, particularly in the United States because of its effectiveness and integrative approach.

Their recommendations to fight covid-19 obviously list the hygiene measures recommended by official sources but also emphasize the optimization of lifestyle habits in order to bring the immune defenses to their full potential.

The botanical compounds feeding the reflection on the fight against Covid-19 are based on studies and effectiveness against coronavirus strains such as Sars-cov-2.  These compounds called ”nutraceuticals” are defined as immuno-adjuvants, which allow to accelerate, prolong and increase the immune responses of specific antigens.

Why some people more than others? To go further in these details, see my article on Zach Bush MD’s analysis of the pandemic and you will understand the mechanisms of action of virus replication related to the application of glyphosate pesticides, air pollution and interactions with certain medications.

Several specific compounds have been shown to be effective in inhibiting the Mpro protease of covid-19, which is vital to virus replication.  Some of these are included in the list below.

The following is a list of compounds from their Functional Medicine Institute website to support the body in limiting the inflammatory damage associated with covid-19 replication.  In order to validate the dosages, you can consult their website.  Most of the compounds cited have a much broader list of recognized and demonstrated beneficial effects on human health than the specificity described that accompanies them in this text.

This compound, naturally present in apples and onions among others, has demonstrated its antiviral effectiveness against RNA and DNA viruses.  It has a role as an antioxidant, anti-inflammatory and signaling agent for post-viral healing.

Extracted from turmeric root, it modulates the NLRP3 inflammatory network and appears to specifically target the main sars-cov-2 protease by inhibiting its replication.

The green tea extract also positively modulates the NLRP3 network and targets the Mpro protease and its replication.  Demonstrates its effectiveness in preventing influenza.

NAC increases the production of Glutathione, one of the body’s natural antioxidants, protecting against influenza.

This well known polyphenol modulates the NLRP3 network and has demonstrated in vitro activity against sea cov.

Activated Vitamin D, is a steroid hormone and a modulator of immune system activity reducing inflammatory cytokines and promoting macrophage function.  It increases the activity of anti-pathogenic peptides and there is evidence that Vitamin D supplementation can inhibit respiratory infections.  According to Dr. Jack Kruse, for most northern countries, it would appear that Vitamin D supplementation is necessary to provide adequate levels for the fall through spring seasons. 5000U per day seems to be the recommendation.

Melatonin is a hormone naturally secreted by the body with adequate exposure to the sun and the absence of blue wave light from artificial lighting and screens at night.  It inhibits the NLRP3 network.  Supplementation is necessary in most cases.

Vitamin A is a critical macronutrient for vision, growth and development, as well as for the integrity of epithelia and mucous membranes.  It is anti-inflammatory and critical in its immune role in T cell production and cytokine production.

Elderberry has a history of being used in traditional preparations to fight viruses and studies confirm this.  Care must be taken in the selection of products containing elderberry and they must be prepared appropriately.

Vitamin C is well known to support various cellular functions related to the immune system and prevent respiratory infections.  The doses here are more in the range of 1-3 grams per day.

Zinc is often overlooked as an essential mineral for supporting innate and adaptive immune functions and zinc deficiency is common.  Research demonstrates the effectiveness of zinc against respiratory infections and treating viral infections.  Zinc lozenges are becoming increasingly common to fight these infections.  Here again, the doses are particularly high in the 30-60mg daily. 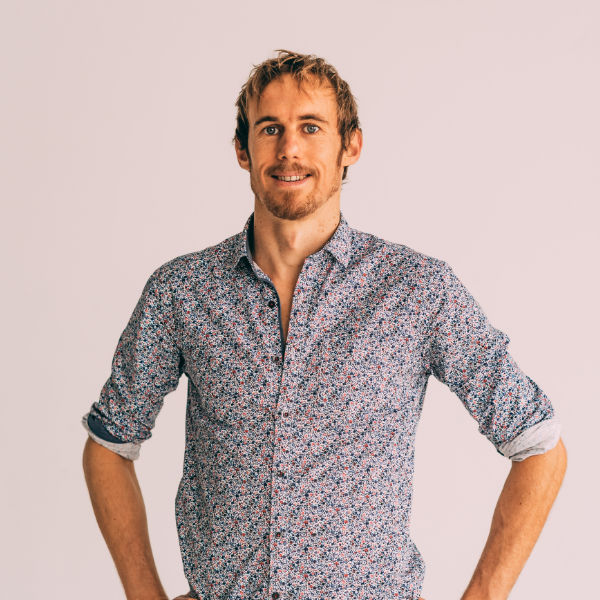 REGISTER TO OUR NEWSLETTER